After reaching the summit of the Western Lyskamm, walk along a sharp ridge which, interrupted by some rocks with a grade III difficulty, leads to the saddle between the two Lyskamm peaks.
Leaving behind the lower of the two peaks, return to the ridge, reaching the forepeak of the Lyskamm Orientale, and from here climb up to reach the summit.
There is a spectacular view, surrounded by the principal peaks of Monte Rosa.  The path for the descent heads towards Colle del Lys. The path encounters some rocky cliffs, and then leads along a very sharp ridge that has a dizzying drop down to the pass.  In case of ice, it is recommended to descend along the south side.
Once at the base, you can easily reach the trail that leads to the Gnifetti Refuge to then later arrive at the Passo dei Salati. 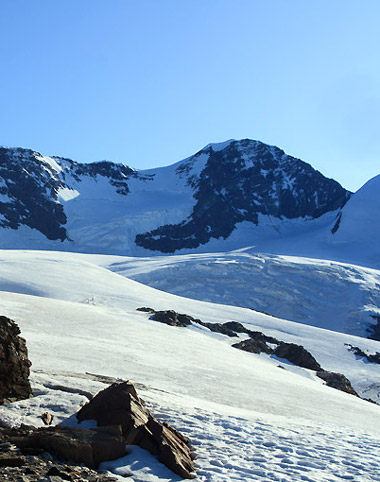